The starting point of the project are high resolution X-ray structures of enzymes and their complexes with their ligands (inhibitors). This includes oligomeric enzymes that are already available in the home laboratory and for which the crystallization protocols are well established: hexameric PNPs from E. coli and H. pylori, trimeric PNPs from calf spleen, and dimeric adenylosuccinate synthetase (AdSS) from H. pylori. The overall scheme of the methodology of the project is given on the figure bellow. 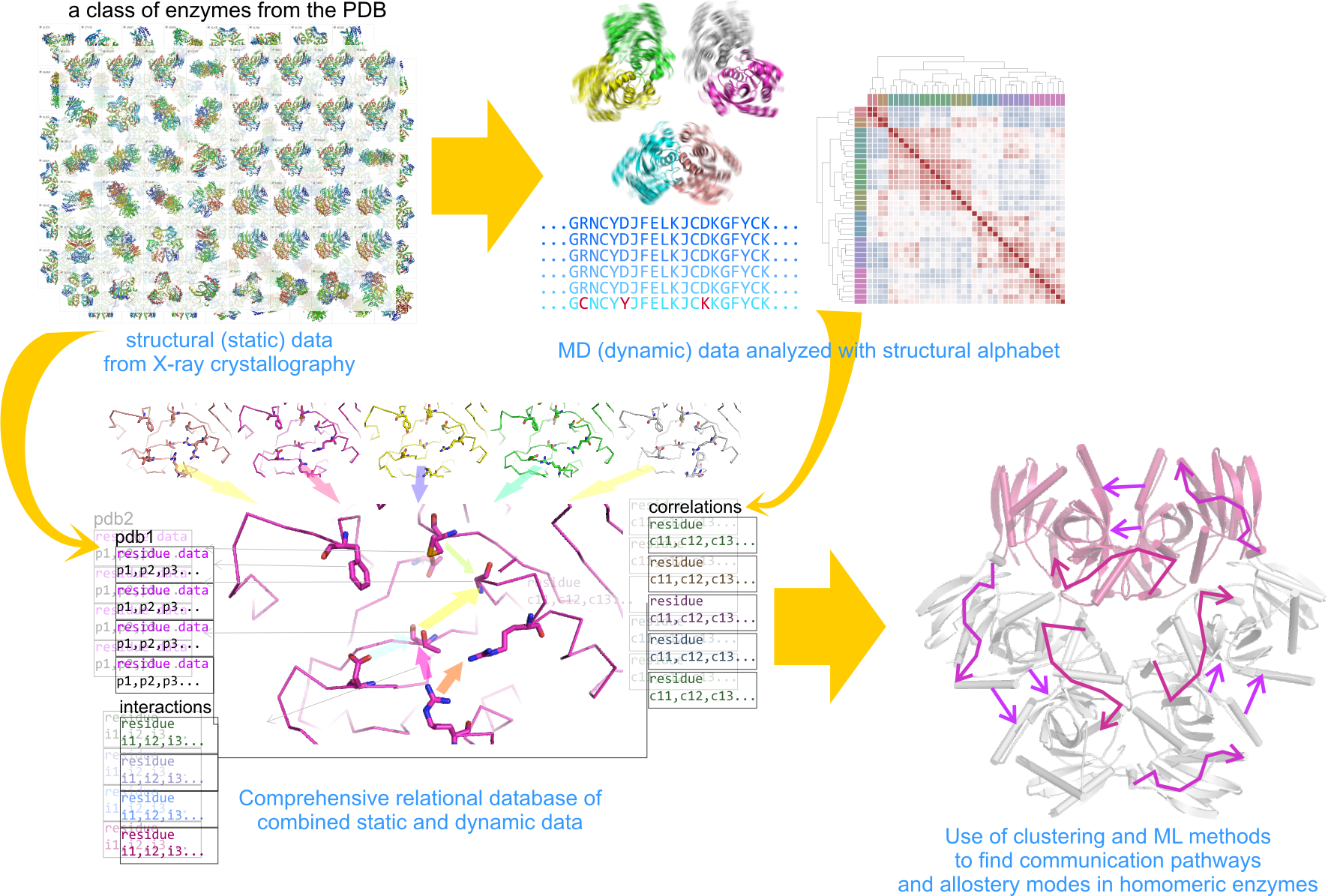 Design and implementation of relational database

However, in addition to the structures determined in the home laboratory, all known 3D structures of related oligomeric enzymes deposited in the PDB are going to serve as an input for creating the central part of the project: a comprehensive relational database of all the residues in all the related structures, containing a multitude of parameters that describe each residue and its environment. The key point is that in this approach no a priori importance is attributed to any residues, treating them all as potentially significant for specific functionality of the enzyme, such as transmitting allosteric communication. Not only will each residue be related to its immediate environment (close contacts, hydrogen bonds, disulphide bridges...), but through these relations to other related enzymes, the environments themselves will be related. Translating purely structural data available from the PDB into such highly interconnected multidimensional representation of annotated residues will yield immensely rich data structure, and the form of relational database will provide extensive querying capabilities. In this way, a search for not only primary sequence conservation, which is in essence one dimensional, but for truly three dimensional and functional conservation which underlies the similarity of the group of enzymes will become possible. The database itself will be implemented as a PostgreSQL database as the most feature rich, reliable open source database system, capable of containing vast amounts of data. It will be filled with data derived from the PDB by automated scripts written in Python programming language, which already contains a number of ready libraries for handling PDB structures. The database schema and the design of tables and relationships within it, will depend on the set of features and parameters that will be selected to describe each residue, and this will in turn require some initial experimenting with possible choices. Another great advantage of relational database model is that only the most immediate residue environment (i.e. nearest neighbours shell) has to be taken into account and the arbitrary number of next level shells is automatically included by the propagation of relationships which is built into the database structure. This will allow very fast and cheap examination of distant relationships which are thought to take place in allosteric communications. As a parallel development in the project, the whole database will be placed behind the web application server with strong visualization capabilities. This will serve multiple purposes: representation of enzymes’ 3D structures with easy visualization of their properties and relationships to other enzymes; as a window for human exploration of the communication pathways discovered by ML methods; for searching the database manually for any property or residue; for plotting and exploration of any correlations. This will be implementing using Django web application framework and D3.js plotting library. As one of the results of the project it is planned that this web server be fully operational and publicly available.